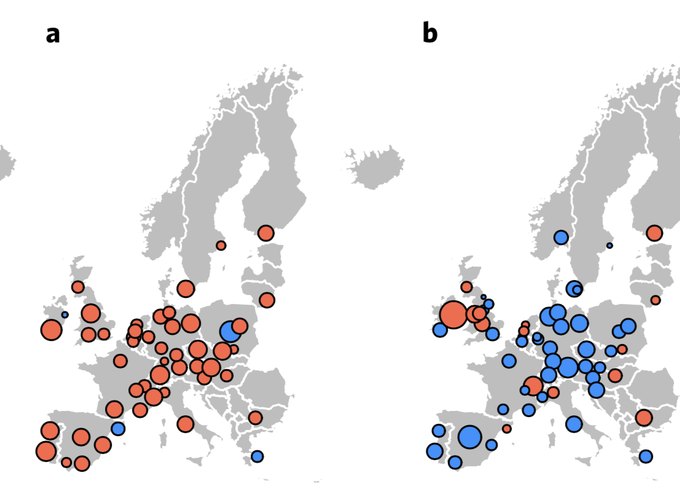 Many European countries do not meet legal air quality standards for ambient nitrogen dioxide (NO$_2$) near roads; a problem that has been forecasted to persist to 2030. Although European air quality standards regulate NO$_2$ concentrations, emissions standards for new vehicles instead set limits for NO$_x$—the combination of nitric oxide (NO) and NO$_2$. From around 1990 onwards, the total emissions of NO$_x$ declined significantly in Europe, but roadside concentrations of NO$_2$—a regulated species—declined much less than expected. This discrepancy has been attributed largely to the increasing usage of diesel vehicles in Europe and more directly emitted tailpipe NO$_2$. Here we apply a data-filtering technique to 130 million hourly measurements of NO$_x$, NO$_2$ and ozone (O$_3$) from roadside monitoring stations across 61 urban areas in Europe over the period 1990–2015 to estimate the continent-wide trends of directly emitted NO$_2$. We find that the ratio of NO$_2$ to NO$_x$ emissions increased from 1995 to around 2010 but has since stabilized at a level that is substantially lower than is assumed in some key emissions inventories. The proportion of NO$_x$ now being emitted directly from road transport as NO$_2$ is up to a factor of two smaller than the estimates used in policy projections. We therefore conclude that there may be a faster attainment of roadside NO$_2$ air quality standards across Europe than is currently expected.